I once saw an eight sided dicetray in play at a convention and decided I can make those myself. After one first try with an eight sided I decided to make them seven sided to give them my own touch and have ever since. At first the seven sides feel a bit awkward but I’m used by now. I have used several different kinds of wood but have stayed true to the basic design.

Almost from the beginning I realised that I usually use dice with games with a board at the center of the table. To have one big dicetray is cumbersome both to make room for on the table and to move between players. I came up with the idea of having a set of smaller trays. The first try I made three trays that became a little too small, so now I make the sets with two slightly larger trays. Sometimes we use the trays to put game components in while playing games that doesn’t use dice. 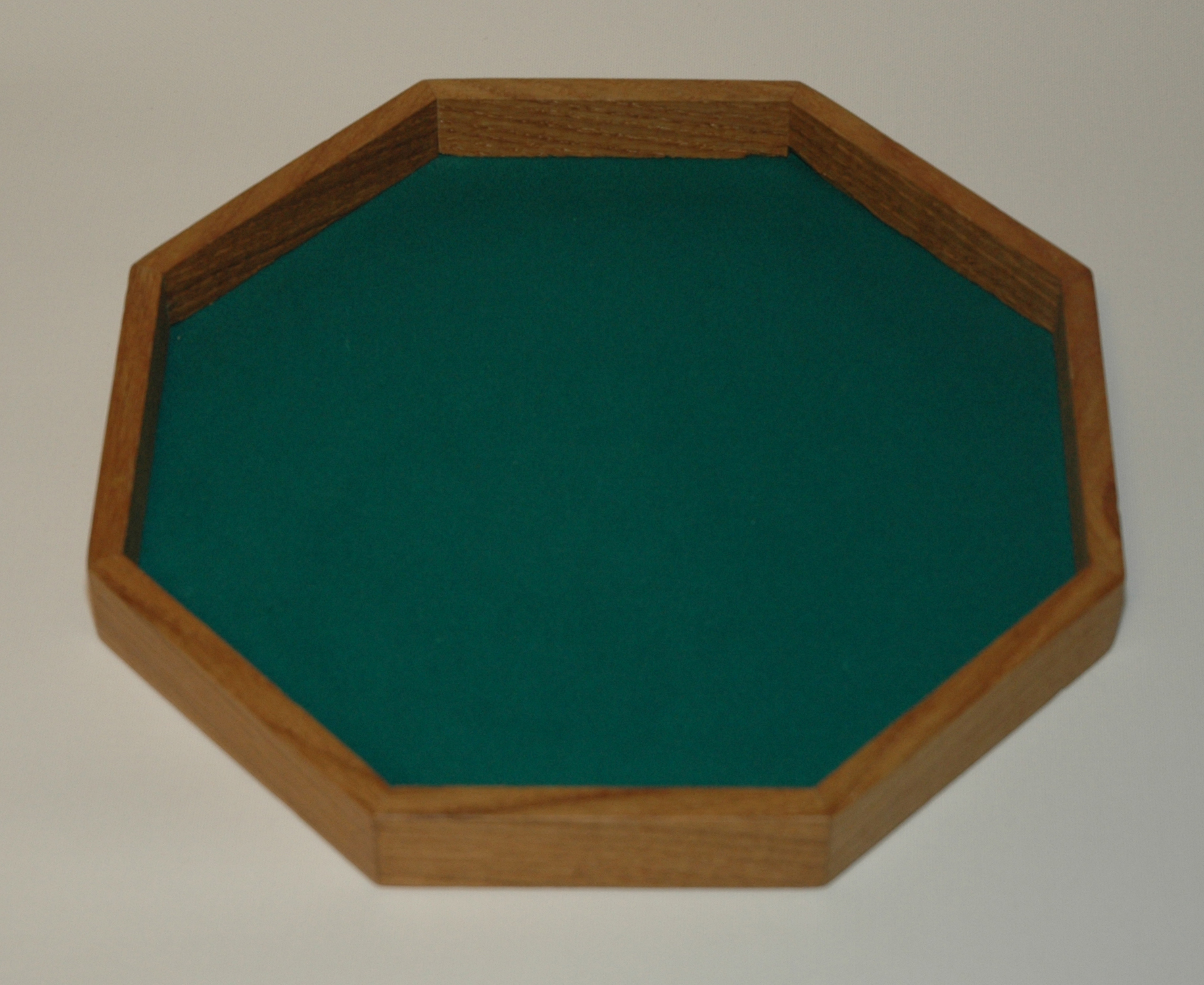 This is the very first dicetray I ever made in 2009. As you can see it has very low and thin sides. It’s also the only tray I ever made that is eight sided. All trays since then are seven sided! 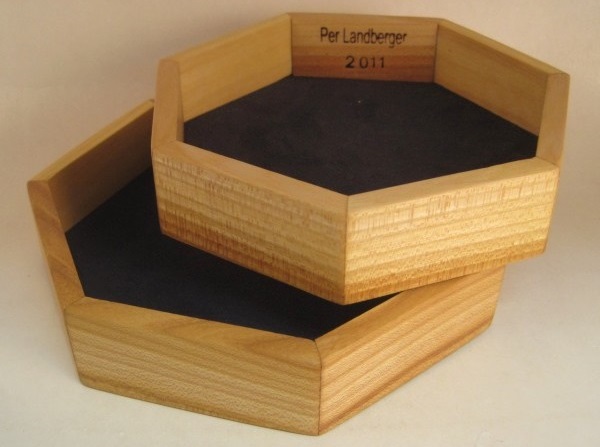 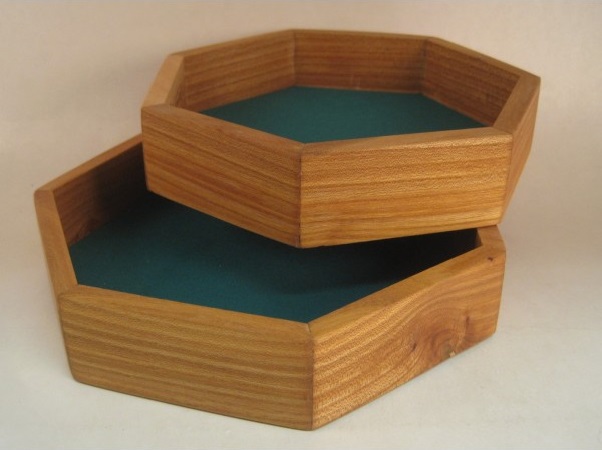 Here are two sets both made of oiled elmtree. One set has blue artificial suede in the bottom and the other green “poker table cloth”. 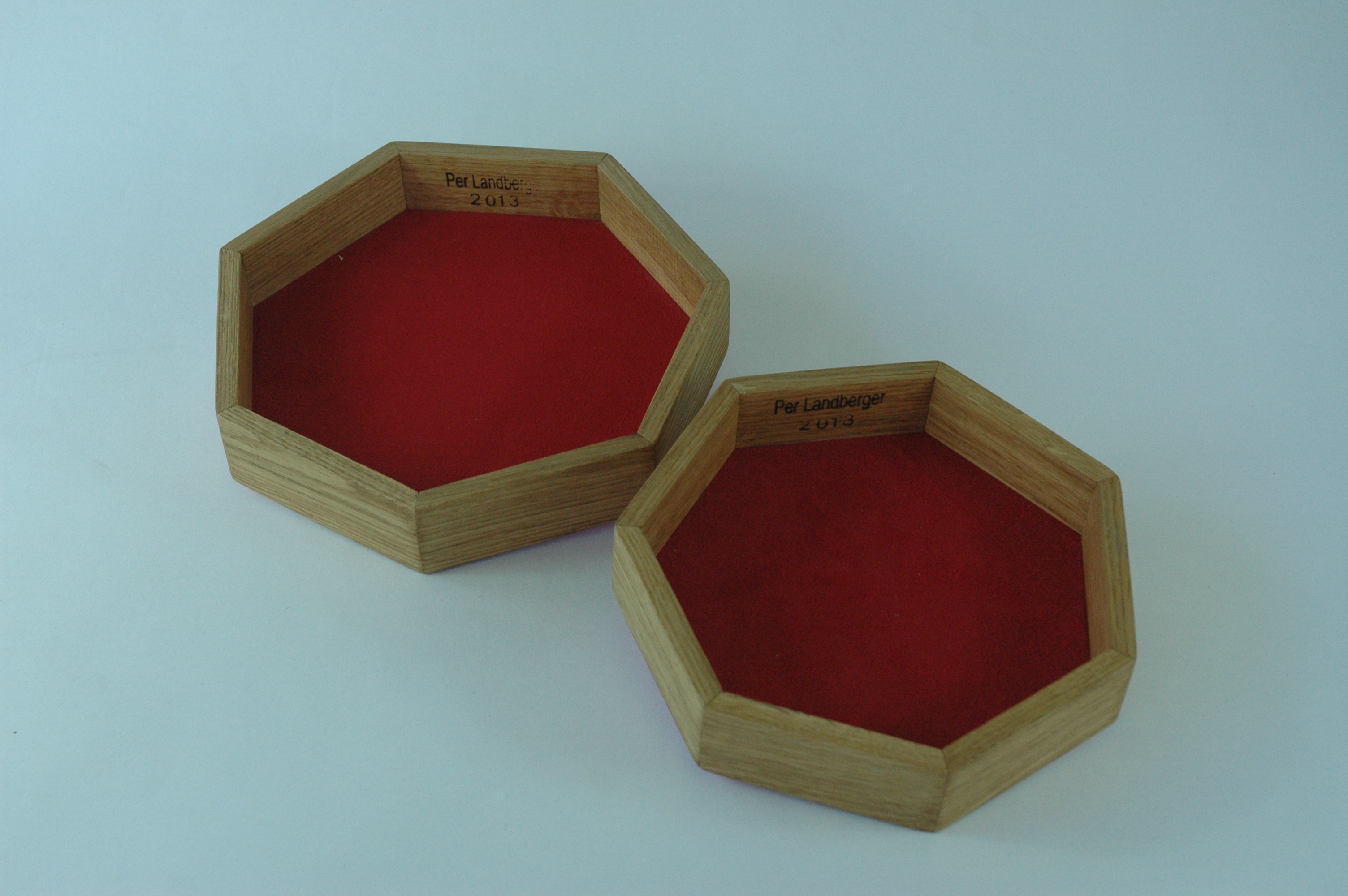 This one is made of oiled oak with red artificial suede. 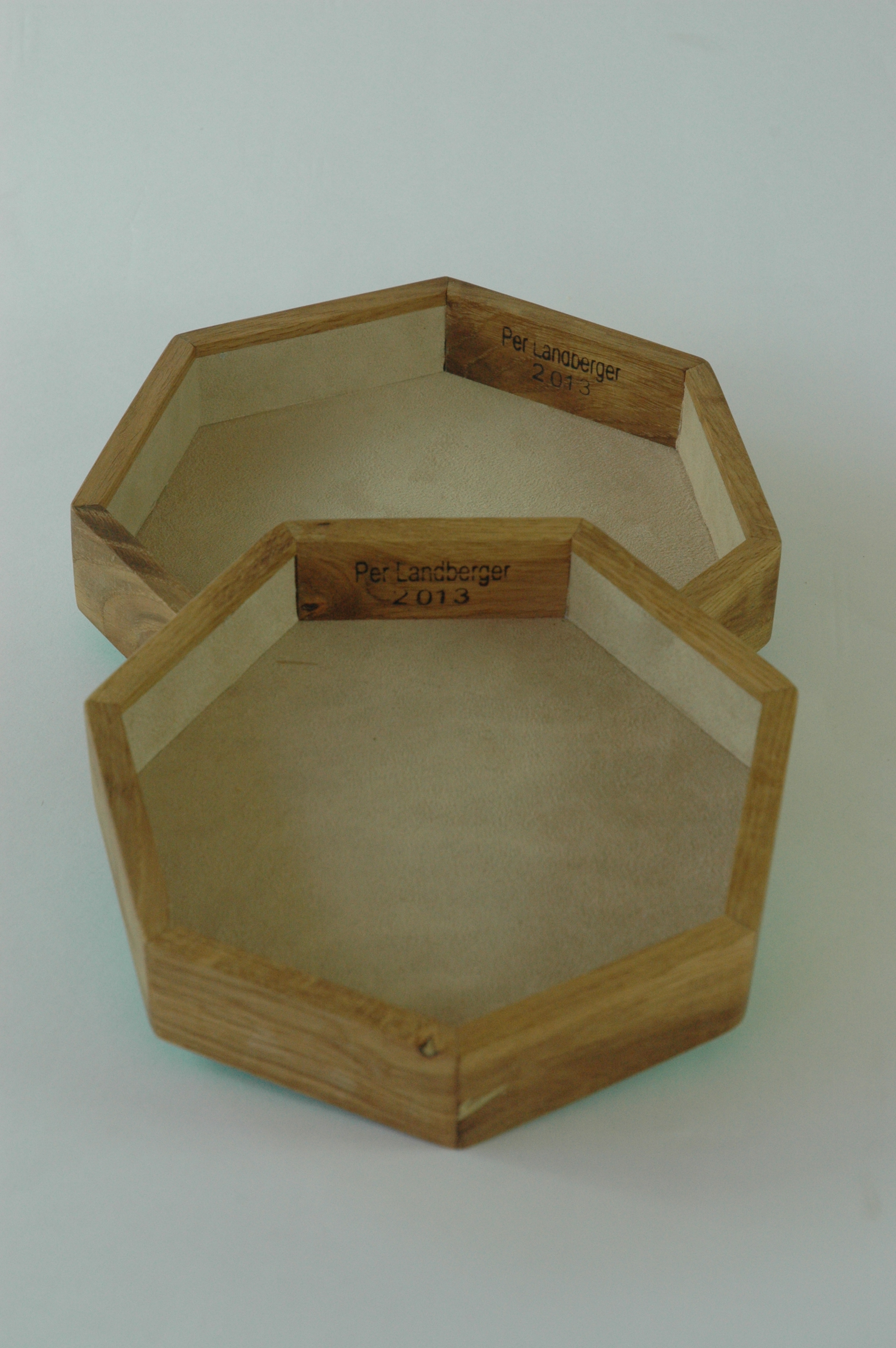 With these sets I tried putting fabric on the inside of the rim. I call these “deluxe”. This is made of oiled oak with sand colored artificial suede. I have also made a similar set with silencing rubber pads between the wood and the fabric as a special order for a hearing impaired person who needed silent dice rolling. 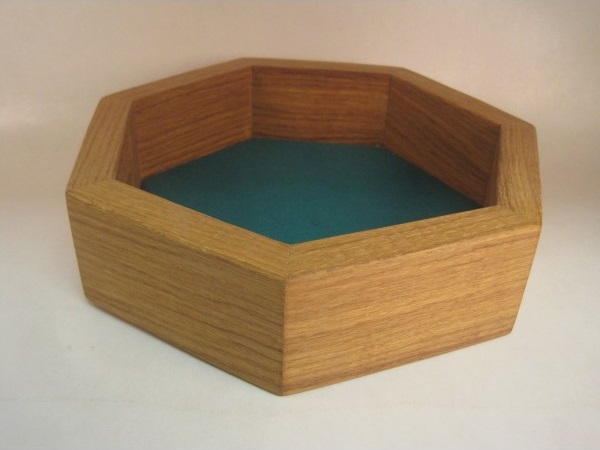 A larger tray suitable for Dice in Dice Yatzy, regular Yahtzee or Roll Through the Ages. It’s made of oiled oak with poker table cloth. The one to the left have one side made of Aspen wood. In 2010 I experimented in mixing Aspen and Oak, in different combinations. Under the fabric there is “stepfoam” usually used under laminate flooring which gives the dice quite a bounce.

Sometimes I use different wood than the usual Oak. You have seen Elmtree ans also Aspen. Theese here are made of Birch. The dark pattern is due to that the newly sawed boards dried tightly together and the moist fresh wood molded. Now when they are dry the mold is dead and harmless, but it created a very beautiful material. 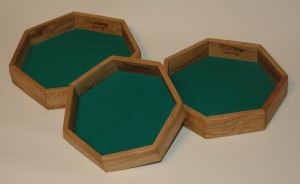 This is a set of three trays made on special order. The smaller two are the same size as a normal two-set and the third slightly larger so they all fit together. 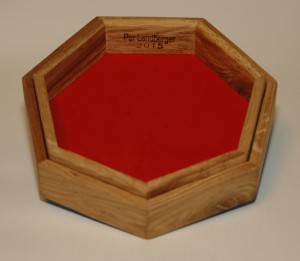 The trays are made to fit in each other to be easily stored.

This is a custom made set with Star Wars X-wing Rebel and Imperial logos. I have used patches with the logos on and made a rubber mat passe-partout around them to make the bottom reasonable flat. 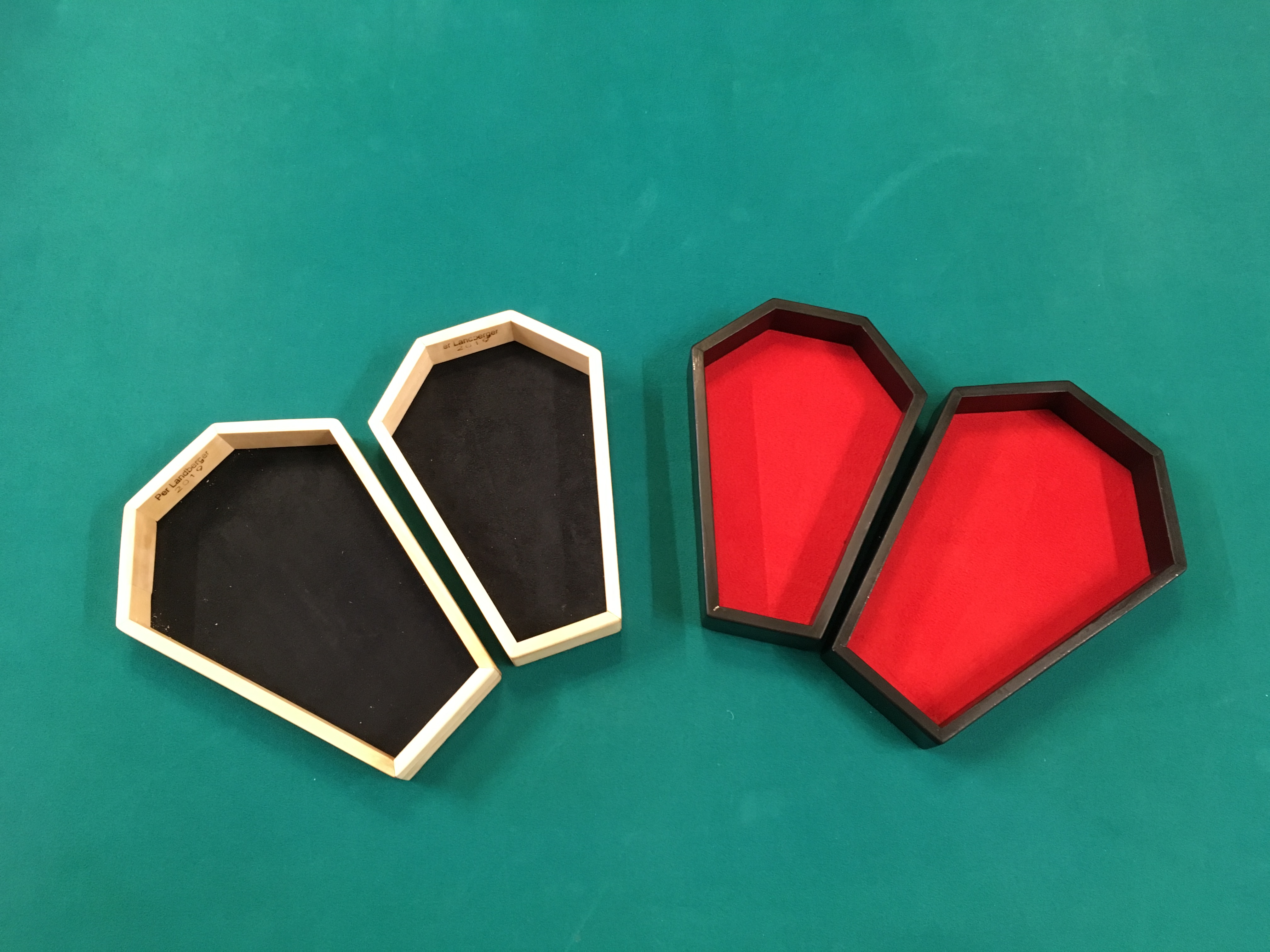 Theese are two sets custom made for the game Village Attacks. They are made from Aspenwood. 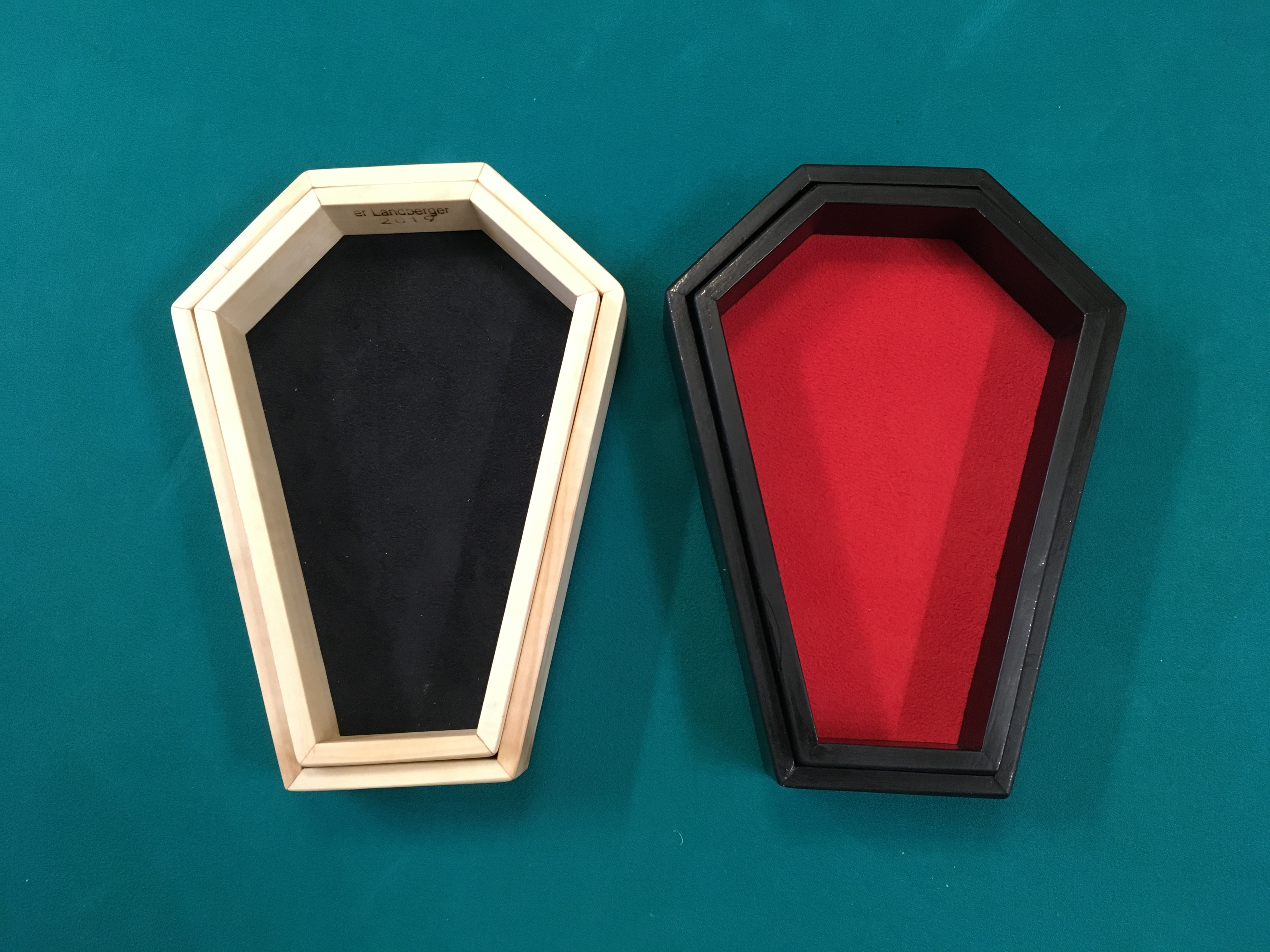 Of course also theese fit together as sets of two.

In Stockholm, Sweden you can sometimes buy my dicetrays at Alphaspel or the store Dragons Lair. What they have in stock can vary a lot, since this is my hobby and I can’t really fulfil the demand.