The Ogels: Building a Tower 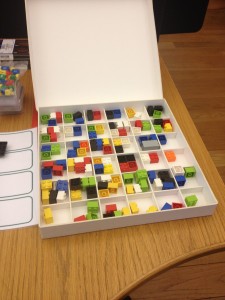 Sofar this is just a prototype.

But you can read about it on  boardgamegeek!

The game participated in Korean Board Games Design Contest 2016 and made it to the finals!

This is a tower-building game using plastic building blocks in eight colors.

The blocks are retrieved from a box with 6 x 6 departments. Only a few departments are available at any time decided by dice rolling. As a part of game setup the building blocks are put in the box and the box is shaken upside down and then right side up to randomly divide the blocks in the departments.

From a deck of “building orders” a row of four available orders are drawn and two rows above it forms a future market.

Each player gets a set of six action cards numbered 1,2,2,3,3,4 and a base plate in his color to build the tower on.

The game is played in six rounds. Each round every player secretly chooses one of his six action cards. Everyone reveals which card they choose and each player gets as many actions as the number on the card. The cards are discarded after each round and cannot be used again.

The players take turns performing one action at a time and does one of the following:

– Take blocks from one allowed department.
– Choose a building order card and build (but you have to have the blocks first). When a card is chosen the cards above are moved down and the lower is now available. Add a card from the deck to the empty space on the top row.
– Discard all available build order cards, move down the cards from the upper rows and refill the top row.
– Reroll the dice and move the flags that shows which departments are available.
– Pass (do nothing).

At the end of each round the dice are rerolled to replace the flags that shows which departments are available next round. Discard all available build order cards, move down the cards from the upper rows and refill the top row.

Some of the build orders are special and are not built until the end of the game where they allow you to add blocks to your tower depending on how your current tower looks like (color patterns).

The graphics are designed by a friend of mine: Agnes Forsell.